The Game of Bridge 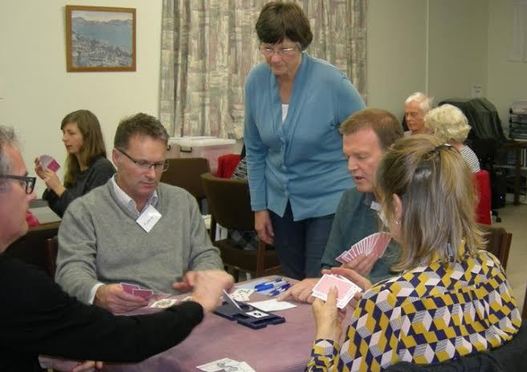 New Member Lesson Night
Bridge is a trick taking card game for four players, in two competing partnerships, with partners sitting opposite each other at the table.

The game is played with a standard pack of 52 cards (no jokers). Each player takes turns at dealing the cards, face down. The game has similarities to Whist, O'Hell! And Five Hundred (500) of which the last is the closest game to Bridge. Exponents of 500 will find that Bridge provides them with greater opportunity to exercise their skills.

There are two stages to Bridge:
The first stage involves the two partnerships (starting with the dealer) bidding in a special Bridge language (in New Zealand this is usually ACOL, named after the Club of that name formerly based on Acol Road in London).

The second stage is the playing of the cards with the Defender to the left of the Declarer laying their card (face up) first. The Declarer's partner then lays all their cards on the table (face up).

From that point the 'Dummy' takes no further part in game aside from playing the cards as per instructions from the Declarer and alerting the Declarer as to which 'hand' the next card is to be played from.

The Declarer's aim is to take at least as many tricks as they contracted to make, whilst the Defenders' is to prevent the Declarer from achieving the Contract.

Our Club holds lessons every year commencing in the month of March. Why not join us and find out if the game is for you?
Bridge Etiquette and Ethics
Kairangi Bridge Club has a number of important playing conventions that make the game more enjoyable for all concerned.  For example, the Club asks that players aim to arrive 15 minutes before the session is scheduled to start and be seated 10 minutes before play starts.  This is so the Director can establish the number of playing tables required and set up the movement between them.

​Etiquette - behaviour that creates a pleasant and enjoyable playing environment.
Ethics - playing fairly and also within the rules.  The most important aspect of ethics is not providing information to your partner (and opposing players) other than through approved processes.  Information provided other than through these processes is called 'unauthorised information' .  The Director can impose various penalties when this occurs.
Etiquette
Ethics
Unauthorised Information

Providing unauthorised information to your partner or to other players covers a range of behaviours including: Other Ethical MattersThere have been a few issues around full disclosure and alerting so the committee thought it useful to remind people of best practice.  We don't expect everyone to read the rule book but for any members who are interested, the relevant rules are in the NZ Bridge Manual 2017 Law 40 1B and 40  5A.
There are no secrets at the bridge table and winners are determined by their skill (with a little bit of luck thrown in!).
Full disclosure is it suggests - not as little as you can get away with e.g. "strong" but as much of your information as you can give e.g. 15+ points most probably a stopper in the opponent's suit.  If you don't know, then you don't know! Undiscussed is a perfectly valid answer to a question about your system.
Alerting is a sub-set of full disclosure.  It is the method to inform the opponents that something other than natural bidding is occurring and provides them with the opportunity to ask for more information.  The bulk of non-natural bids must be circled (e.g. transfers).
This full disclosure is particularly relevant to Monday night players, many of whom have gone on to develop their own bidding and lead systems.
At the Kairangi Bridge Club, we would like everyone to actively adopt this Code of Ethics and when you and your partner sit down with EVERY new
opponent, practise full disclosure, be it basic 4 card ACOL, Precision or your own Bidding and Lead System.
If you have a complex system, maybe it's a good idea to use a PRE ALERT card - but please note that you must verbally inform your opponents as well.

When you are Dummy

Local Club Rules
The Role of the Director
The Director is responsible for the onsite technical management of the bridge event.
In carrying out this function, the director facilitates the maximum opportunity for enjoyment of the game by the players.
The director also endeavours to apply the laws and associated regulations in a consistent manner.
If a player is not satisfied with the director's ruling, then there is a right of appeal and the proper procedure is to notify the director in the first instance.
As a certain number of boards are to be completed within a given session, the director determines the time to be allocated.  The time allocated to one board is usually seven minutes and for two boards, 13 minutes.
In the event of slow play, the director may need to approach some players and take any necessary steps at her/his discretion to prevent other players from being disadvantaged by the slower players.
In addition, the director: